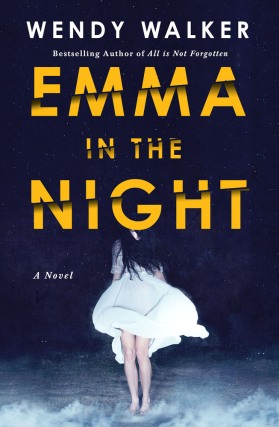 Let me introduce you to a new badass character you’re going to love! Cass Tanner from Emma in the Night by Wendy Walker is a deliciously complicated eighteen-year-old girl, who may be working her own angle.

Three years ago, Emma and Cassandra “Cass” Tanner went missing from a beach in the middle of the night. Three years later,  Cass is back with the tale of a mysterious island and two strangers who have helped them escape their warped life in Connecticut.

The case is headed by FBI Agent Leo Strauss and Dr. Abigail Winter, a forensic psychologist who specialized in narcissistic personality disorder. As Dr. Winter listened to Cassandra’s story she begins to see details that quite add up. Slowly Dr. Winter unravels the details of the Tanners home life where lines were crossed and the children were in competition with their elders. But it also makes her realize, that one sister’s return may just be the beginning of a crime.

When I finally put Emma in the Night down, I had to take a moment and collection my feelings about what I just read. Wendy Walker has painted a stark and unforgiving portrait of a dysfunctional family in the midst of a crisis through a unique narrative lens where the two points of view we get are an adult Cass and the forensic psychologist. I can’t recall ever reading a thriller that’s narrated quite like this, and it was intriguing to me, but at times extremely frustrating.

For almost the first half of this book it feels like nothing happens. Which isn’t entirely accurate because Emma in the Night relies mostly on memory and a “narrative within a narrative” type structure to convey what happened to Cass and her sister from the night they disappeared until Cassandra’s return home. There are time jumps, but in the context of memory, not in a “then and now” story format.

While it works, it’s a different kind of reading, and as I took in the narrative I could see how the pieces would unfold if this was a screenplay.

I didn’t hate this method of storytelling, it was just that the way Cassandra broke down her narrative had a distinct stream of consciousness to it, complete with the unrelated tangents that happen when someone is naturally talking. While Cassandra’s tangents were related to the story, we’re often following three different timelines, and it’s a lot to keep straight.

As much as I sometimes wanted to scream “what does this have to do with anything,” I did enjoy the novel.

I was engaged in Cass’s story, and I was engaged with Dr. Abigail Winter’s perceptions of the family, but unlike some thrillers Emma in the Night does require me to surrender to one character’s recounting of what happened.

One thing that I found really refreshing about Emma in the Night was the way Abby was constructed. One thing that I find often causes mysteries to lag is that the law enforcement officers often assigned to cases have a clinical detachment that makes that is only useful for dreaded info dumps. (Some examples of this are in The Couple Next Door by Shari Lapena and Everything You Want Me to Be by Mindy Mejia.)

Abby feels like a whole person, with a past all her own. While it isn’t Abby’s story, we get the sense that she has just as much riding on this as the reader.

Abby has a connection to the case, and a history with narcissism that colors her perceptions. It also makes her a compelling lens, and I wanted to read her chapters. If I slowed down with Abby’s chapters at all, it was because I was trying to piece together the narrative as a whole since there was some overlap in what Cass was narration and what Abby was processing.

I won’t lie, the constant ruminating over certain memories, where I didn’t get a lot of new information for several pages, did make it hard for me to get into the book for short periods of time. However, once I was with the characters I didn’t want to put the book down. Fortunately, all of that frustration and agitation paid off with a spectacular ending.

If you have the patience for a slow burn psychological thriller then I think Emma in the Night is the book you’ll want to read this summer.

My only question: who is going to direct the movie adaptation of this portrait of a crazy family?

Emma in the Night by Wendy Walker is available August 8th wherever books are sold. You can purchase a copy through Book Depository, Amazon, Barnes & Noble, or your local independent bookseller.

You can add Emma in the Night to your Goodreads here.

3 thoughts on “Book Review: Emma in the Night by Wendy Walker”