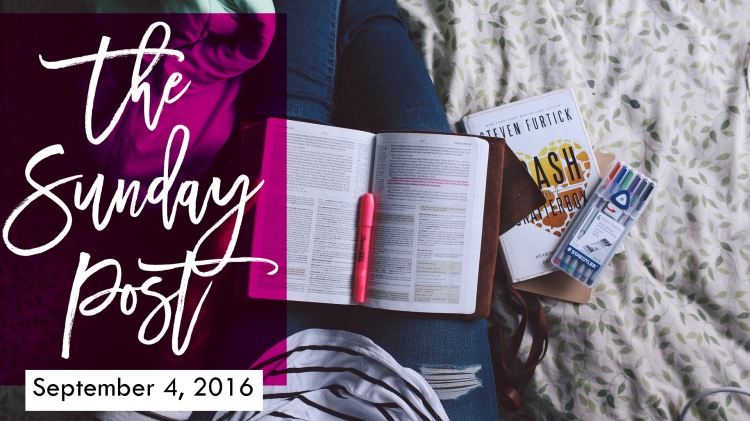 I can’t believe it is already September! Summer seems to have come and gone and I feel like we are well on our way to the busy pre-holiday season.

This Week on Comma Hangover

Elsewhere Around the Internet

The last chapter in my Pretty Little Liars coverage from season 7A went live this week. I recounted the Top 8 Moments from “The DArkest Night.” Check it out over on Tell-Tale TV.

In a couple of weeks I am going to start covering the ABC series Blindspot. A show that I started covering in February! You can my reviews from Season 1 here. (Plus, there are a few articles in here in which I mentioned characters.)

Fridays and Books introduces you to “The Best Series You Probably Haven’t Heard Of.” I definitely haven’t heard of any of these and it was a very dangerous post to read for my insane TBR pile.

LionAroundWriting shows off some Cut n’ Paste Graphics.  I love collage art! These are pretty cool! Go check them out.

Elan Mudrow posted this amazing poem (or is a list) about words and how writers are constantly in debt! Please read it, it’s awesome and I got a good smile from it.

Rant and Rave About Books discusses the hype of popular fantasy series and if they are worth the hype. I haven’t read any of them, but Cinder is on my list.

Mystery Date With a Book Blogger asks how many books you can read at once. Considering how my “Currently Reading Tag” looks right now,  I think I can read up to three.

Taylor Tracy shares her thoughts on diversity and hostility in the Twitter Community.  She makes some great points about hostility and how it does not breed understanding but separation.

Articles from Around the Internet

Slate ran a story about a fashion designer who is imagining a female president showing off her cleavage. Ellie Tahari’s new ad campaign where a model who just about clears the 35-year-old age requirement commands the highest public office in form-fitting clothes. Am I the only one who wants to imagine that a woman can not just run the free world but do it looking this way and be taken seriously? I mean, look at this headline, the fact that female, president, and cleavage all show up in the same sentence should tell you about what “grabs our attention.”

So you know that chatter about how Taylor Swift wasn’t going to be at the VMA’s this year? According to The Cut, and many tweeters, she just got picked for jury duty. I am all for celebrities doing their civic duty, but I feel really sorry for the parties in the cases hat were in jury selection that day. I am sure this pool of jurors was probably dismissed.

Observer reported that SETI is investigating a possible extraterrestrial signal from deep space. The X-Files fan in me is a little apprehensive, considering all the alien first contact scenarios that haven’t gone well and the conspiracy on which that show thrived.

Emilie de Ravin tweeted about an American Airlines flight attendant who tried to confiscate her breast pump. Hello Giggles has more on the story, and this is an issue that has been brought up before in many ways. Can we have a serious discussion about the shame human beings have about their bodies.

That wraps up this week on Comma Hangover! What have you guys been up to this week? Any links and stories that I should check out?