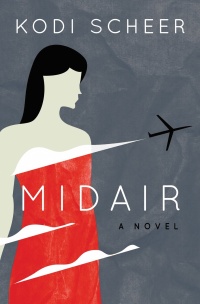 In a story of betrayal, revenge, and regret, Kodi Scheer captures the angst of growing up and accepting your past in Midair.

Through this book you follow four friends as they embark on a trip to Paris.

Kat: The queen bee who is heading to Yale in the fall. She seems to have it all, including Daddy’s credit card.

Kiran: The sporty friend who also has a bright future ahead of her.

Whitney: The queen bee wannabe who dreams of being a fashion designer.

Vanessa: The girl who has a secret plan to end her life by jumping off the Eiffel Tower.

What starts as four friends embarking on an adventure soon turns into a twisted game of Truth of Dare as Vanessa twists and contorts her friend’s motives to suit her own needs and desires.

Midair is a book I took a chance on. It was a Kindle pick but the first lines grabbed me and I thought that with all the moody narrators I’ve been enjoying lately that the audiobook narration would do perfectly.

The narration is only five hours long so it isn’t a big time commitment and Rachel Vivette gets the heavy cough-syrupy narration just right. She lets the words linger and drip from her mouth.

It’s a beautiful narration that fits the frame of mind of the main character.

Midair is first and foremost about Vanessa and a plan she has for revenge against the girl who ruined her life. After the death of her brother, Vanessa planned to ace the ACTs and get into a college on a full scholarship.

She succeeded, getting a perfect 36, but the girl next to her from French club cheated off her and her scores were cancelled. Now that Vanessa has no prospects and no future that she can see outside of her Chicago suburb.

So, as the four friends embark on their trip to Paris, Vanessa plans to leave the world in a spectacular fashion, by leaping off the Eiffel Tower.

The premise is heavy and the book does involve a lot of brooding on Vanessa’s part. Vanessa is a smart girl and a very well-studied girl. She knows the history of every site they visit, some of which are very vulgar.

Vanessa is pretty despondent throughout the book but there’s an element of this book that reminds me of The Girls by Emma Cline. In both works the narrators are really teenager-ish and have a really myopic view of the world. Their view is filtered though by glimpses of an older and wiser version of the character.

In Vanessa’s case, it’s a woman who has grown up and had a child. A child who wishes to see Paris. This element is what I found most dynamic and the fact that we see the future Vanessa in just these little snapshots is captivating and left me with just enough to push through till the end.

The ending is worth but the book is bittersweet overall and does include triggering elements. While the story starts off sounding very superficial it soon becomes a dark tale that is very rewarding in the end.