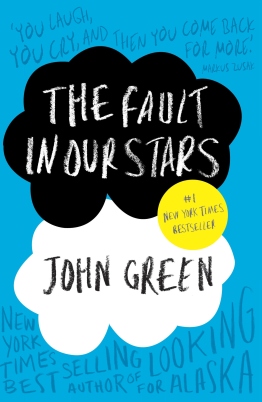 When I was five-years-old, I was diagnosed with Leukemia. While I have been cancer-free for twenty years, Hazel’s story touched me in a certain way that I could only read about twenty pages at a time. I got through about one-fifth of The Fault in Our Stars the first time I read it.

The cancer genre is something I am well-versed in, and the one thing I know is that it never has a happy ending, at least not entirely, and at the time–I didn’t want to cry. When I picked up The Fault in Our Stars again, I was determined to get to the end of this book that everyone was talking about.

If you are unfamiliar with this title, The Fault in Our Stars is about two teenagers who meet in a cancer support group. Hazel Grace Lancaster has thyroid cancer originally but now has an impressive, well-settled satellite colony in her lungs. Thanks to a cancer trial that worked, she can continue to exist on assisted oxygen indefinitely. Augustus Waters had osteosarcoma, and he lost one of his legs.

When the book starts off, it seems like these characters have good prospects. They are both healthy, and neither of them in imminent danger of dying like in Jenny Downham’s novel Before I Die. While the first half of the book is the love story between Hazel and Augustus, complete with casual banter and jokes about cancer survivors smoking.

And on their last day in Amsterdam, that’s when the book turns from not-being-about cancer to bringing it to the foreground. The last third of The Fault in Our Stars is heart-wrenching but still holds the staccato humor from the first half of the book.

It seems wrong to call this a cancer book, but it also isn’t a satire. What I love most about The Fault in Our Stars is that while Hazel and Augustus meet in a cancer support group and their lives are colored by cancer, they don’t live their lives around their treatments. The trip to Amsterdam should have been impossible with Hazel’s condition, but they made it work. That’s the life Hazel should be living. While she’s had thyroid cancer she has been given a “miracle” with this successful clinical trial. She can go on living her life as long as the tumors don’t grow.

The trip to Amsterdam should have been impossible with Hazel’s condition, but they made it work. That’s the life Hazel should be living. While she’s had thyroid cancer she has been given a “miracle” with this successful clinical trial. She can go on living her life as long as the tumors don’t grow. August shows Hazel that she can live her life, and that’s one of the most important things I took away from The Fault in Our Stars.

Before I attempted reading this book for the second time. I thought that maybe I would go see the movie before I read the book. (I know, scandalous! I am much reformed now!) My logic at the time was that if I spent hours reading twenty pages at a time, I would spend a lot more time crying than I would if I just watched a two-hour movie.

A friend bought me the DVD because she felt guilty for not wanting to see a sad movie with me and it has sat in my pile of DVDs for the last six months until I finally watched it this week.

In the end, I am glad I didn’t see the movie before the book. While both the book and the movie are great works, I think I found the book to be funnier. Although I enjoyed seeing the movie because it brought to life details such as Van Houten’s favorite Swedish hip-hop song. I feel like the ending lost something in translation from book to movie.

The changes that have been made are ones that I can live with, but I do recommend the book first. Some of the reasons become inherently sad once you see them on screen, but the bits of humor that the book is infused with help soften the blow. Augustus and Hazel’s story is poignant and funny and really touching and in the end, shows us exactly how life is meant to be lived.

Have you read The Fault in Our Stars? Do you like the book or the movie better? Tell me what you think in the comments below!

2 thoughts on “Better Bound: The Fault in Our Stars by John Green (Book + Movie Review)”