Shortly after the New Year I discovered Book Riot’s Read Harder Challenge. The challenge promotes a year of mindful reading in order to expand your horizons. I wasn’t looking for a reading challenge this year but I told myself that it might be fun and when I saw the list of challenges I realized that many of the books that I had been hoarding would fit nicely into about half of the categories. And the rest, would lead to a year of mindful book buying. 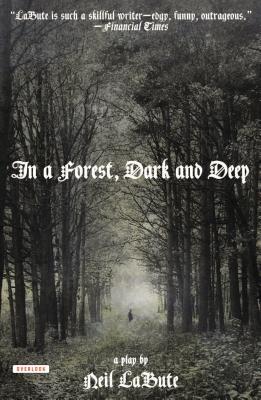 My first venture into this challenge was “#23: Read a Play.” I am not one to read plays and if I had seen the task at any other time I would have probably picked up a work of Shakespeare. But, a course of events lead me to another more contemporary solution and That’s when I picked up In a Forest, Dark and Deep by Neil LaBute. This was a play I had been wanting to see or read since it debuted in 2011. I have been a fan of Olivia Williams’ who originated the role of Betty since I started watching Dollhouse. The problem was I was 2o-years-old, broke, and in another country.

As luck would have it, a trip to New York City to see Sir Patrick Stewart in No Man’s Land and Waiting for Godot with friends and fellow thespians resulted in a trip to The Drama Bookshop. There was a corner of the shop dedicated to plays. I was a literature student so I had assumed they would mostly have Shakespeare, but while we looked for a copy of No Man’s Land to compare the written version to the stage, I saw it. The dark black and white cover with almost gothic lettering of In a Forest, Dark and Deep.

I purchased the play and had intended to read it shortly after I bought it home but instead it sat on my bookshelf waiting to be read. So when I discovered this challenge it seemed like the perfect time to dust it off and give it a read.

Set in a cabin in the forest, Betty, a college professor, has called upon her younger blue-collar brother to help her pack up the possessions of a former student who she was renting the apartment out to. As the night unfolds so do many secrets the pair have been keeping. While I found some of the plot points predictable what I found the play itself really easy to read.

I have always had a hard time reading scripts without other people around to narrate the other roles. This play was simple since it involved two people and while the dialogue and plot seemed a little drawn out at times it also felt organic. It was easy for me to imagine two siblings talking in a similar cadence.

I read through this play in one night and not only did it get it over my reading slump, but it left me really hungry for more Neil LaBute scripts. I am very glad I also picked up Some Girl(s)! I think I would have enjoyed this play overall had I seen it live, but going from the script alone I would give it 3.5 stars.

What can you use this book for in your #ReadHarder challenge?

2 thoughts on “Starting #ReadHarder with In a Forest, Dark and Deep by Neil LaBute”